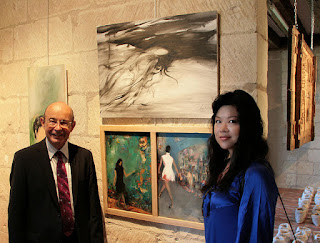 This is the sad story how my wife lost some of her best paintings because of the city of Tours in France.

It all started so well. In 2009 the city of Tours organized a large exhibition of art by Chinese artists born in the sixties, seventies and eighties ("Exposition d'art contemporain Chinois 60 - 70 - 80"). Participation was by invitation only, and my wife (Yang Lu, also known as Lu Schaper, see picture) was one of the happy few who were selected. Three of her best works (including one diptych) were shown during the exhibition in the castle of Tours. Mayor Jean Germain (see picture) opened the exhibition, that was organized by Lise Han, one of his staff.

After the exhibition, it turned out that the organization (Lise Han) had sent our paintings together with all other art pieces to China. Of course, this was without our permission. All other artists were living in China, but my wife resided in the Netherlands, where the paintings should have been sent. My wife contacted Chi Zhang and Qingyuan Zhang, who had been responsible for the Chinese part of the organization. After a series of long drawn-out email exchanges, they had to admit that they could not find my wife's paintings in China. According to their information, the Chinese customs had sent them back to Tours (attention of Lise Han), because they were obviously not in the shipping list of art that had been sent from China to Tours in the first place. We were not successful in contacting Lise Han, but we did get hold of her assistant at the time, Lulu Zhou, who unfortunately could not help us either. We sent an email in French to the local government in Tours, explaining the problem and asking their help to bring us into contact with Lise Han. No reply. We sent a letter in French to the police in Tours reporting the paintings as missing. No reply. A French friend of ours called the police in Tours and was told that this had to be reported to the police in the Netherlands. We tried, but of course the police in our city said this was a situation for the French police.

In 2012 things started to accelerate. Via social media (facebook, twitter, blog) we spread the story and it was picked up by a reporter in Tours. His article in the local newspaper triggered a friend of ours who lives in the vicinity of Tours, and he decided to take action. His persistence results in several meetings with key players in Tours, including the elusive Lise Han. Thanks to his work, a meeting was held at the Hotel de Ville of Tours on September 20th 2012. Among the participants were François Lagière (directeur du cabinet du Maire Tours), Christian Favereau (director of the castle of Tours), Jean-François Lemarchand (directeur Office du Tourisme Tours), Lise Han, a lawyer of the city of Tours, our friend, my wife and myself. The whole story was discussed, the lack of reactions from the City of Tours and the local police were deemed shocking, but in the end we all had to conclude that the paintings had disappeared, and that the city of Tours as organizer of the exhibition was responsible. We discussed potential financial compensation and our proposal for this was well received. We were told that the city council still had to approve, but meanwhile everything was lined up so that compensation could be paid to us.

After this session, delay upon delay occurred. The subject was not put on the agendas of a number of subsequent council meetings, new elections were held, and suddenly another scandal involving Lise Han escalated. She was arrested and charged for fraud concerning the organization of Chinese weddings in Tours and its surroundings. Others were accused as well, including directeur du cabinet du Maire Lagière, and even mayor and senator Jean Germain was caught up in this - he committed suicide in April 2015. Meanwhile the city council elections of Tours had seen a surprise win by the opposition, resulting in a new mayor, Serge Babary. The new leadership of the city of Tours has told us that they did not plan to give us any financial compensation with the bizarre argument that what the previous management had done was none of their business.

So here we are. No paintings, no compensation. Perhaps we could force the City of Tours to pay us via a court case in France, but that would be a difficult, time consuming and expensive route, that we have decided not to take, It will be clear that we think the behavior of the City of Tours in this case has been scandalous. Please avoid visiting this city, especially during the festivities of Saint Martin in 2016, when mayor Babary is hoping to welcome many visitors in his city.

Finally..... if you see any of these paintings somewhere, please contact us. 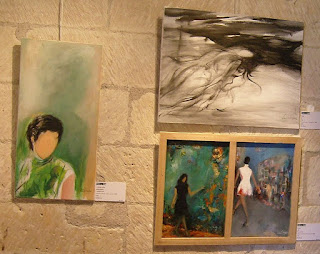 Email ThisBlogThis!Share to TwitterShare to FacebookShare to Pinterest
Labels: In my life
Newer Post Older Post Home
About me:
Dutchman, married to a beautiful and highly talented artist from Shanghai. Although my education (PhD chemistry) is very much associated with the left side of the brain, I like to use my right side for my hobbies: music, art, photography.
About this blog:
I started this blog in August 2006, just wanting to share what I considered interesting pieces of visual art and music. I suffered from blogging blues for most of 2008, but making a fresh start in October of that year has done wonders for my inspiration.
In case you did not notice, most posts end with a small symbol... just click that for the relevant link.
All pictures in my blog are hosted on blogger - if some do not show up (the red cross syndrome) it is a blogger hiccup. Right click and selecting "show picture" should do the trick.
About the reconstruction:
End March 2017 I converted thousands of posts to draft, in order to sort out potential copyright issues. Many of these have been restored in the course of the year.