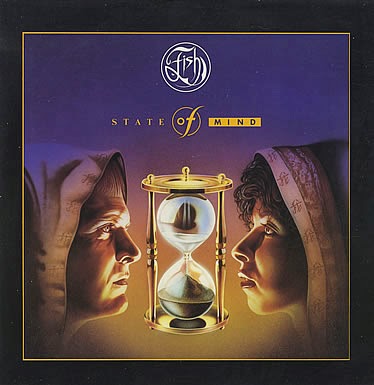 Fish is the artist name of Derek William Dick, still best known for his years as lead singer of neoprog band Marillion. His solo career is well worth exploring, and he has often demonstrated a good taste in covers, both for his albums and his singles. This one is from 1989, his first after he left Marillion. The cover was designed by the legendary Mark Wilkinson, responsible for Marillion's brilliant artwork until Fish's departure. More about Fish on the linked Wikipedia page.

Email ThisBlogThis!Share to TwitterShare to FacebookShare to Pinterest
Labels: Beautiful Single Covers
Newer Post Older Post Home
About me:
Dutchman, married to a beautiful and highly talented artist from Shanghai. Although my education (PhD chemistry) is very much associated with the left side of the brain, I like to use my right side for my hobbies: music, art, photography.
About this blog:
I started this blog in August 2006, just wanting to share what I considered interesting pieces of visual art and music. I suffered from blogging blues for most of 2008, but making a fresh start in October of that year has done wonders for my inspiration.
In case you did not notice, most posts end with a small symbol... just click that for the relevant link.
All pictures in my blog are hosted on blogger - if some do not show up (the red cross syndrome) it is a blogger hiccup. Right click and selecting "show picture" should do the trick.
About the reconstruction:
End March 2017 I converted thousands of posts to draft, in order to sort out potential copyright issues. Many of these have been restored in the course of the year.