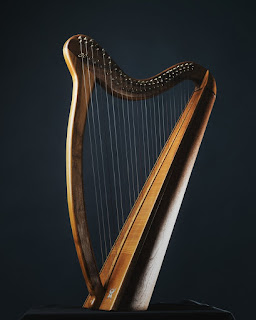 The first concertante instrument in the new edition of this subject (background link) is perhaps not that unusual. The harp is a well-known stringed musical instrument that has a number of individual strings running at an angle to its soundboard; the strings are plucked with the fingers (Wikipedia). Concertos in the classical and romantic era were largely limited to harp specialists, but in the 20th and 21st century a number of bigger names under the composers took to composing concertos for the instrument. Some examples: Glière, Ginastera, Higdon, Rodrigo, Rautavaara, Cowell, Aho, Dohnányi, Milhaud, Rota, Tailleferre, Villa-Lobos, Tveitt, and perhaps the most famous harp concerto of all, and certainly my favourite, Alwyn's "Lyra Angelica". For the illustrative example, I have selected the less known but beautiful 1970 harp concerto by Welsh composer William Mathias, which I have on a Lyrita CD in a version by Osian Ellis and the London Symphony Orchestra under David Atherton (Amazon link).