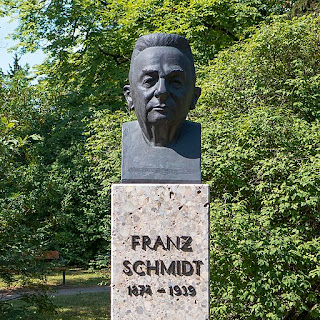 This is a new series for the blog, although partly similar to a series of posts 5-10 years ago, which I now converted to draft status. I will focus on composers I like very much that did not make the top100 composers list as compiled from personal preferences of 56 Talk Classical members (link).

Franz Schmidt (1874 - 1939) was an Austro-Hungarian composer, whose reputation has been tarnished by his alleged sympathies with the Nazi regime (which were not entirely clear by the way). In addition, he is often dismissed as an anachronism, stcking to a late romantic style. In reality, there are plenty of more modern influences in his works. His oeuvre includes four substantial symphonies, chamber music, an oratorio, organ music and two operas (Wikipedia).

Email ThisBlogThis!Share to TwitterShare to FacebookShare to Pinterest
Labels: Unsung Composers
Newer Post Older Post Home
About me:
Dutchman, married to a beautiful and highly talented artist from Shanghai. Although my education (PhD chemistry) is very much associated with the left side of the brain, I like to use my right side for my hobbies: music, art, photography.
About this blog:
I started this blog in August 2006, just wanting to share what I considered interesting pieces of visual art and music. I suffered from blogging blues for most of 2008, but making a fresh start in October of that year has done wonders for my inspiration.
In case you did not notice, most posts end with a small symbol... just click that for the relevant link.
All pictures in my blog are hosted on blogger - if some do not show up (the red cross syndrome) it is a blogger hiccup. Right click and selecting "show picture" should do the trick.
About the reconstruction:
End March 2017 I converted thousands of posts to draft, in order to sort out potential copyright issues. Many of these have been restored in the course of the year.