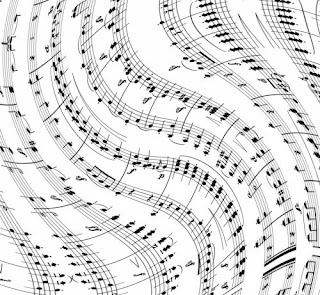 Earlier this year, I posted a list of 100 favourite composers based on the  top 30 favourite composers of 56 Talk Classical bulletin board members (link). I did not post my own top 30 yet. Time to make amends. I'm posting the list in segments of five, in order to say something about the composers. To prepare this list, I looked at how many compositions a composer has that I rate in my personal top 100, how many just one tier below that, and how many are still really worthwhile below that. I was handing out negative points in my head for (famous) compositions I don't like at all. For the final ranking, I asked myself: composer A or composer B - you can keep the works of only one of them. It is all not very scientific, and the ranking will undoubtedly change a bit from year to year, but it makes for a good snapshot of my taste.

Before we kick off with #30 in the next post in this short series, I'll use this one for a few words about composers who did not make it. I split them in two groups: the most famous ones (those who made the Talk Classical members' top 30), and less famous ones that just missed out.

Ten famous composers who did not make my list:

Robert Schumann (#9 on TC list):
He would probably end up in the lower regions of my top100. One great work (the piano concerto), a few good ones, but surprisingly I have problems with his Lieder (one of my favourite genres).

Igor Stravinsky (#17 on TC list):
A near miss for my top30, mainly thanks to the three early ballets (including the outstanding Sacre du Printemps) and the Symphony of psalms. Less impressed with a lot of his other work.

Béla Bartók (#20 on TC list):
Two works I like (the famous violin concerto and the Music for Strings, Percussion and Celesta, but for the rest no connection with his works. Not a top100 composer for me.

George Frideric Handel (#21 on TC list):
No. Just no. A composer I can do without completely.

Franz Liszt (#24 on TC list):
A bit like Haydn with respect to how I see him, never boring, never really exciting.

Sergei Rachmaninoff (#26 on TC list):
An early favourite when I started exploring classical music, but with time my interest faded, especially for his most famous works. Still a composer who would end up in the #50-100 range.

Hector Berlioz (#27 on TC list):
Started with a bang: the Sinfonie Fantastique is one of my favourite symphonies. Everything that followed I find a lot less interesting, except for the song cycle Nuits d'été . Still another composer who would end up in the #50-100 range.

Arnold Schoenberg (#29 on TC list):
I have no problem with serial, dodecaphonic or atonal music, but somehow I find it difficult to connect with the composer who kickstarted it. I prefer Berg in that respect. Not a top100 composer for me.

Alexander Scriabin (#30 on TC list):
A surprise for me that he ended up in the top30. I like his work, but it lacks real highlights for me. He would end up in the lower part of the #50-100 range in my ranking.


Ten less famous composers who just missed out on my list:

Benjamin Britten (#39 on TC list)
Plenty to enjoy in his work, especially when voices are involved such as the War Requiem and the opera Peter Grimes.

Samuel Barber (#52 on TC list):
Some real highlights (especially Knoxville Summer of 1915), but succumbing to the competition for the first 30 places. Maybe next time.

Max Reger (#62 on TC list)
Arguably the most important organ music composer after Bach. Some very good orchestral and chamber music as well - but lacking one or two real masterpieces to make the top30.

Henryk Górecki:
Another near miss who may do better next time. His famous third symphony is one of my all-time favourites, but his harpsichord concerto and string quartets are great as well.

Max Bruch:
Often regarded as a one hit wonder because of his first violin concerto, but he wrote plenty beautiful other music, including two more violin concertos and great string quartets.

Josef Suk:
The son-in-law of Dvorak, and father of the famous violinist of the same name. His Asrael symphony is stunning, but his other orchestral works are good as well.

Joachim Raff:
In his own time, one of the most famous composers, only to fall out of favour completely. In recent decades, he has gained more interest, and the more I hear, the more I like him (although I find his concertos a bit underwhelming). Probably a top30 composer the next time I prepare a list. Best work: Symphony 5 "Lenore".

Einojuhani Rautavaara:
Probably Finland's most famous composer after Sibelius. He passed away rather recently in 2016. His style is an accessible but no sappy neo-romanticism. I like his Cantus Arcticus in particular.

Aulis Sallinen
Another Fin, and still alive. His symphonies are great, but his masterpiece for me is his orchestral song cycle Songs of Life and Death.


In about a week I'll be posting numbers 30 to 26. And we'll start with a bombshell!

Email ThisBlogThis!Share to TwitterShare to FacebookShare to Pinterest
Labels: Articulations
Newer Post Older Post Home
About me:
Dutchman, married to a beautiful and highly talented artist from Shanghai. Although my education (PhD chemistry) is very much associated with the left side of the brain, I like to use my right side for my hobbies: music, art, photography.
About this blog:
I started this blog in August 2006, just wanting to share what I considered interesting pieces of visual art and music. I suffered from blogging blues for most of 2008, but making a fresh start in October of that year has done wonders for my inspiration.
In case you did not notice, most posts end with a small symbol... just click that for the relevant link.
All pictures in my blog are hosted on blogger - if some do not show up (the red cross syndrome) it is a blogger hiccup. Right click and selecting "show picture" should do the trick.
About the reconstruction:
End March 2017 I converted thousands of posts to draft, in order to sort out potential copyright issues. Many of these have been restored in the course of the year.