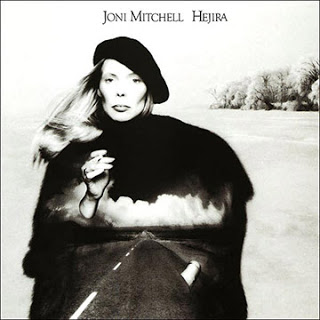 Another blast from the past: this album cover featured in the blog in 2007, one year before the re-start, and I never re-posted it until now. I quote the original text: "I was a painter first," Joni Mitchell once said. "I trained as a commercial artist, as well as a fine artist. So when I began to record albums, I thought album art was a great way to keep both careers alive." Hejira is probably her most beautiful cover. The cover art was put together from a number of different photos, including a studio portrait by Norman Seeff and shots by Joel Bernstein taken on a frozen lake.

Email ThisBlogThis!Share to TwitterShare to FacebookShare to Pinterest
Labels: Beautiful Album Covers
Newer Post Older Post Home
About me:
Dutchman, married to a beautiful and highly talented artist from Shanghai. Although my education (PhD chemistry) is very much associated with the left side of the brain, I like to use my right side for my hobbies: music, art, photography.
About this blog:
I started this blog in August 2006, just wanting to share what I considered interesting pieces of visual art and music. I suffered from blogging blues for most of 2008, but making a fresh start in October of that year has done wonders for my inspiration.
In case you did not notice, most posts end with a small symbol... just click that for the relevant link.
All pictures in my blog are hosted on blogger - if some do not show up (the red cross syndrome) it is a blogger hiccup. Right click and selecting "show picture" should do the trick.
About the reconstruction:
End March 2017 I converted thousands of posts to draft, in order to sort out potential copyright issues. Many of these have been restored in the course of the year.