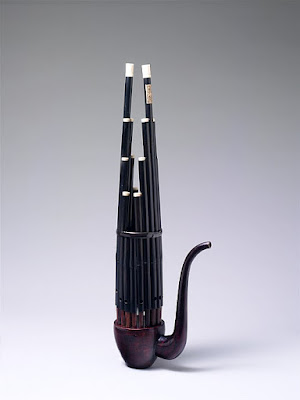 Too many people think that classical music is a thing of the past, whereas excellent classical music is still being composed today. For this blog post, I have selected a dozen concertos composed in the 21st century, by twelve different composers (and for ten different instruments). These are all works I love listening to, and all the depicted CD's are in my collection. The picture above depicts a sheng, one of the concertante instruments featured in today's post. The image is in the public domain. 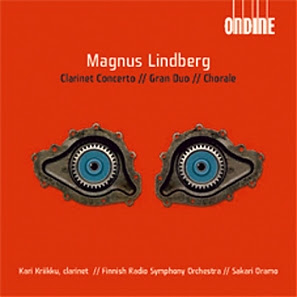 Clarinet Concerto by Magnus Lindberg  (2002)
This Clarinet Concerto is a composition by the Finnish composer Magnus Lindberg. It was written for the Finnish clarinetist Kari Kriikku.  The concerto is composed in a single movement divided into five sections. One critic called it "shiny, sophisticated, nostalgic cultural artefact, indubitably contemporary in language yet sensuously easy (tuneful, even) on the ear." The recording shown above is by Kari Kriikku and the Finnish Radio Symphony Orchestra under Sakari Oramo, on an Ondine CD. 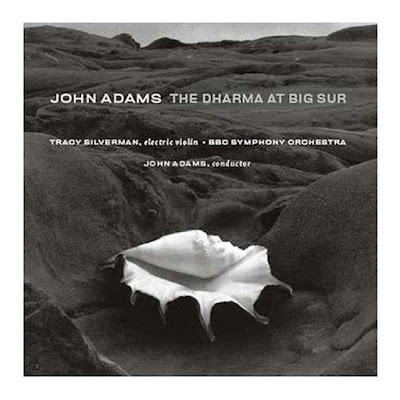 Electric Violin Concerto "The Dharma at Big Sur" by John Coolidge Adams (2003)
The Dharma at Big Sur is a composition for solo electric violin and orchestra by the American composer John Adams. The piece was composed for the opening of Walt Disney Concert Hall in Los Angeles and was conducted by Esa-Pekka Salonen. The electric violin solo was written for violinist Tracy Silverman. The piece is divided into two movements, titled A New Day and Sri Moonshine, which are intended as homages to Lou Harrison and Terry Riley, respectively (from Wikipedia). The recording shown above is by Tracy Silverman and the BBC Symphony Orchestra under John Adams, on a Nonesuch CD. 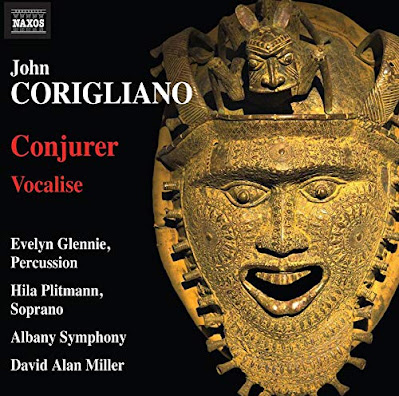 Percussion Concerto "Conjurer" by John Corigliano (2007)
Conjurer is a concerto for percussionist and string orchestra with optional brass by American composer John Corigliano. The work was jointly commissioned for the percussionist Evelyn Glennie by a number of orchestras.  It is in three movements titled Wood, Metal, Skin - the titles correspond to the type of percussion instruments used in it, such as marimba and wood block for the first movement, vibraphone and chimes for the second, and timpani and bass drum for the third. The recording shown above is by Evelyn Glennie with the AlbanySymphony under David Allan Miller, on a Naxos CD. 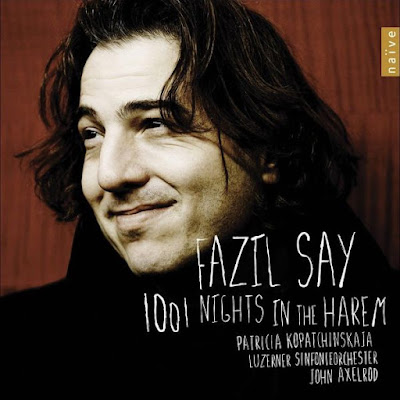 Violin Concerto "1001 Nights in the Harem" by Fazil Say (2007)
1001 Nights in the Harem is a Violin Concerto by Turkish composer Fazil Say. It was commissioned by the Lucerne Symphony Orchestra, and written for Patricia Kopatchinskaja. The title recalls the famous collection of fairytales The Thousand and One Nights, and the solo violinist takes on the role of `principal storyteller'. Addition of Turkish percussion enhances the atmosphere of the piece. The recording shown above (of the  world premiere performance) is by Patricia Kopatchinskaja and the Luzerner Symphony Orchestra under John Axelrod, on a Naive Classique CD. 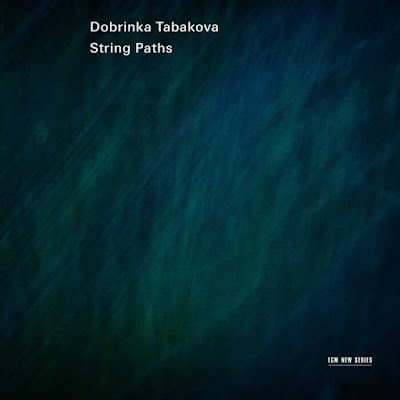 Cello Concerto by Dobrinka Tabakova  (2008)
This Concerto for Cello and Strings in three movements is by British/Bulgarian composer Dobrinka Tabakova. It is a good example of her style that has been characterized as "richly melodic, texturally sensuous, often emotionally radiant". The recording shown above is by Kristina Blaumane and the Lithuanian Chamber Orchestra under Maxim Rysanov, on an ECM New Series CD. 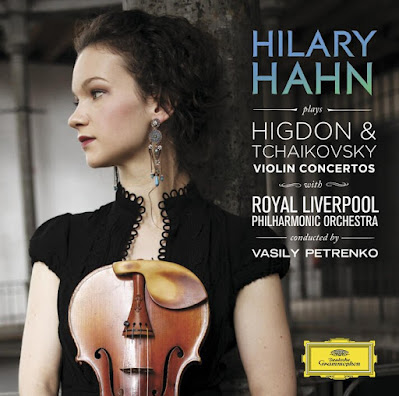 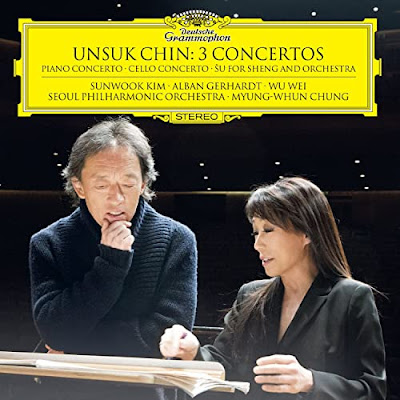 Sheng concerto "Šu" by Unsuk Chin (2009)
Šu by South Korean composer Unsuk Chin is a concerto for Sheng and orchestra, the only one I know for that Chinese mouth-blown free reed instrument consisting of vertical pipes. The work goes far beyond novelty value, and is to my taste one of the best concertos of the century so far. The title of Su comes from an ancient Egyptian symbol for air. The recording shown above is by Wei Wu and the Seoul Philharmonic Orchestra under Myung-Whun Chung, on a Deutsche Grammophon CD. 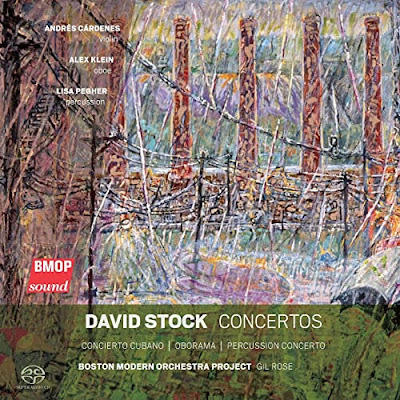 Oboe Family Concerto "Oborama" by David Stock (2010)
Oborama by American composer David Stock is a unique concerto, not just for this century, but for all time. It is a beautiful neo-romantic concerto in five movements, and in each movement the soloist gets to play a different member of the oboe family: the English horn, musette, oboe d'amore, bass oboe, and regular oboe. The recording shown above is by Alex Klein and the Boston Modern Orchestra Project under Gil Rose, on a BMOP CD. 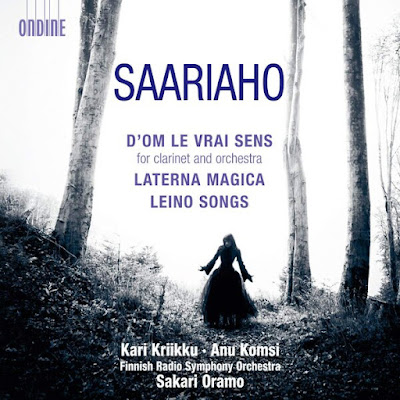 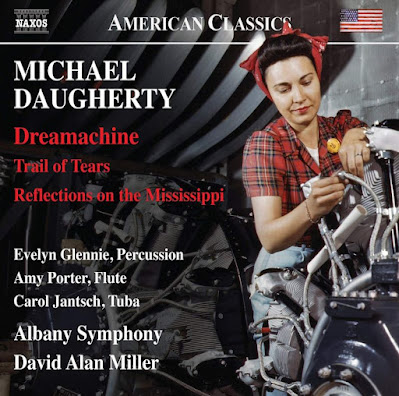 Flute Concerto "Trail of Tears" by Michael Daugherty  (2010)
Trail of Tears is a Concerto for Flute and Orchestra by American composer Michael Daugherty. The title refers to a series of forced relocations of Native American nations from their ancestral homelands in the Southeastern United States. The concerto ends with a beautiful Sun Dance, showing the tribe’s eventual triumph over oppression. The recording shown above is by Amy Porter with the Albany Symphony under David Alan Miller, on a Naxos CD. 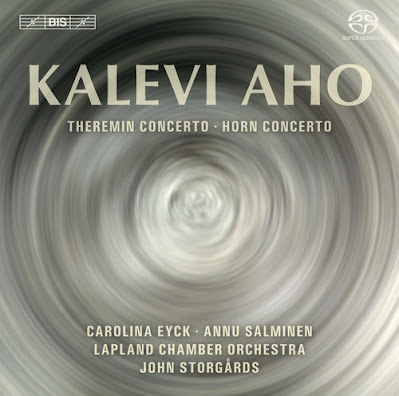 Theremin Concerto "Eight Seasons" by Kalevi Aho (2011)
Eight Seasons is a Concerto for Theremin and Chamber Orchestra by the Finnish composer Kalevi Aho. Concertos play a prominent role in his output (the number is already at almost two dozen), but even so, a concerto for the electronic beast the theremin is pretty rare. And pretty attractive. The recording shown above is by Carolina Eyck with the Lapland Chamber Orchestra under John Storgårds, on a BIS CD. 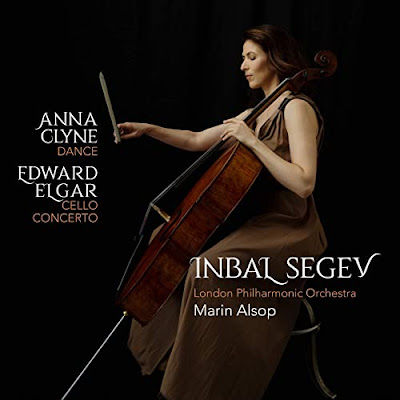 Cello Concerto "DANCE" by Anna Clyne (2019)
DANCE is a composition for solo cello and orchestra by the English composer Anna Clyne. Alternatively described as a concerto or a suite, it consists of five movements. It is a stunning lyrical work, one that I regard very highly. The recording shown above is by Inbal Segev with the London Philharmonic Orchestra under Marin Alsop, on an Avie Records CD.
Copyright statement: posting lower quality album covers is deemed fair use.
Posted by Art Rock at 5:00 am

Email ThisBlogThis!Share to TwitterShare to FacebookShare to Pinterest
Labels: Classical Music
Newer Post Older Post Home
About me:
Dutchman, married to a beautiful and highly talented artist from Shanghai. PhD in chemistry, and a career in a large multinational energy company until early retirement. My hobbies: music, art, photography, chess, sudoku, word games.
About this blog:
I started this blog in August 2006, just wanting to share what I considered interesting pieces of visual art and music. I suffered from blogging blues from time to time which made me re-start the blog a few times. I did another complete re-set in January 2022 with a change of types of post as a last attempt to save the blog.
All pictures in my blog are hosted on blogger - if some do not show up (the red cross syndrome) it is a blogger hiccup. Right click and selecting "show picture" should do the trick.

Each post contains a statement on the copyright situation. If you still find a picture on this blog that you are the copyright owner of, and object against the use, please drop me an email and I will remove it.